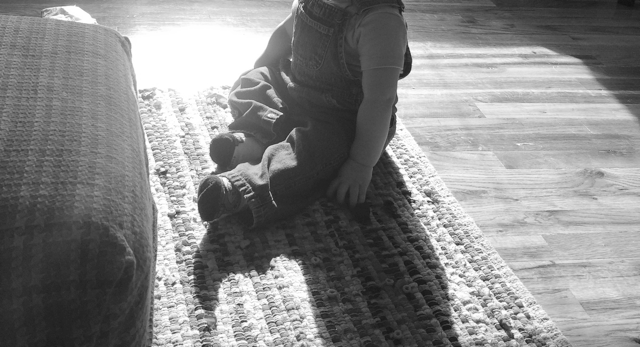 And I was kind of stressing about how I was going to break the news. Especially since you guys have all been so sweet and just showered me with praise for taking on two foster babies at once and telling me I must have super powers and it must be so hard.

The thing is, it was hard. Like, really hard. And it wasn't that we didn't love baby B who came to us about three months ago, but he was a little bit more high-maintenance than "Ace" (who we've had since he was 8 days old, back in June, if you're new) and the strain of having two infants that are only 5 months apart was really taking a toll on our household. We were all getting pretty cranky and short-tempered and stressed. We had talked a little bit about the fact that in may not be in the family's best interest to have two babies at once...but at the same time we hated the thought of "giving up" on baby B. What if God sent him to us for a reason? What if we were wimping out when the little guy needed us?

One day we had a sort of "last straw" moment and we finally decided to make the call to his social worker to ask them to find another foster home for him. It was extremely hard to make that call, and I felt like I was the most selfish person in the world. After I hung up I was hoping to feel relief, but I didn't really. I'm not sure what I felt. Stoic? We still weren't sure if we were doing the right thing. But it was done. Then I started to think about all the positives about going back to a one-baby household. I was fantasizing about sitting in my regular pew again at church instead of being hidden in the nursery all day every Sunday where I don't get to see anyone (so sad!) And I thought: "Hey! Maybe baby B is going to a foster home that will be much more suitable for him! Yeah! This will be great for him! ...Hopefully." And then I started to feel awfully proud of myself for being such a big girl and saying "no!" to something even when it was hard to.

So then there was the meeting. Whenever a child gets moved in foster care there is a grand meeting with everyone involved in his case, including the birth mom, which made me feel a little nervous. But we went. And we told them everything we were thinking and what we thought baby B's needs were and all the reasons that we, despite our love and concern for him, weren't able to be his caretakers anymore.

And then. Somehow. We ended up telling them that we'd keep him after all.

Aren't we ridiculous?! I could not help myself! They were discussing what would need to be done, and they might have had to move him out of town away from his birth mom because we are so low on foster homes in our county and I just couldn't stand the thought of it. I am pathetic!!! It turns out I'm not such a big girl after all. :O)

So, hey, no emotional post now. And guess what's awesome? After we made the call to his social worker last week, baby B started sleeping through the night. Just like that! Let's pray it lasts. I could get used to this sleep stuff...and the church nursery isn't so bad. In fact, we just painted it and it's kind of nice in there!